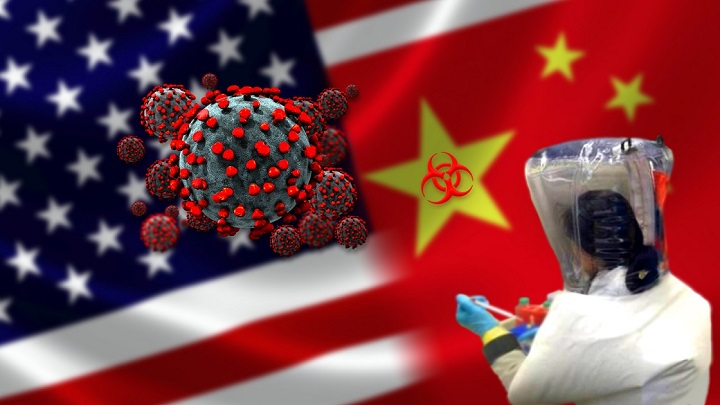 China Used a Virus to Assist their Manchurian Biden Surrogate to Defeat President Trump and Install Biden whose Socialist Democrat Party to Fundamentally Transform America, as they say Never let a Crisis go to Waste.
View, Read, Like & SHARE 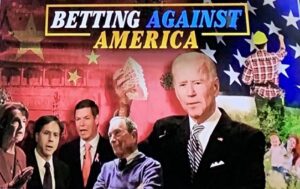 Video Link: https://rumble.com/ved5xf-china-virus-un-declared-war-w-sa.html
President Eisenhower warned us about the Government Agencies at all Levels that would Dictate what US Citizens can & can’t do, as the Socialist Democrats & some Republicans at Federal, State, County &Cities are taking Our Freedoms away without even Firing a Shot, or Declaring Martial Law, and they used the China Virus Crisis to do it, as they say Never let a Crisis Go To Waste, and they didn’t. US Citizens have been brought to their Knees by the constant message of Fear by the Socialist Media and those who Control It, like Gates, Bloomberg, and other American Globalists who care nothing about Our Republic or Freedom but only in Exercising Power over the Last Fortress of Freedom and by putting a Self Serving Evil Hearted people in office including the White House seem to have accomplished their Goal of One World Government.
Bloomberg’s Economic Forum had a Chinese Official stating:
We believe it’s the Community that must do well and the United States and Western Europe believes in individual Rights, we must change this so all people take orders and follow instructions, this is Communism being spread by the World Globalists, and this includes many US Billionaires like Soros, Gates, Media, Politicians, and is being taught by Marxist Professors at American Universities and then taught by their students to our K-12 children, and parents wonder what’s happening.
I believe we have one Last Opportunity at Restoring our Freedoms, and it’s coming in the 2022 Election cycle which has already started, and if the People don’t Stand Up and Fight back by Supporting, Funding, and Campaigning for Candidates that have a History of Supporting, Protecting and Defending the U.S. Constitution then the End of Our Republic is Truly at Hand, and will be accomplished without a Shot Being Fired or some other Form of Resistance, thereby all who’ve Fought, Bled and Died for Our Freedoms will have done so in Vain.
I hope everyone viewing this Post don’t continue with Politics as usual by Voting for the Career Politicians who’ve laid the foundation for this Fraud to take place, they did nothing to Prevent it, and believe holding meetings after the fact is just more Political Window Dressing, the question to ask them is why didn’t they fix our Election Laws long ago, to not only prevent the fraud, but write laws covering what County Recorders can and can’t do, you can drive a Semi through our Election system and all the meetings and johnnie come lately promises won’t fix that.
One More Thing Wal-Mart Closing 500 Gun Counters in their Stores; Surprise, what do you expect they’re major supporters of the Socialist Democrats, and the #1 Importer of China’s Exports along with Amazon.
The only way to Stop China is to Stop Buying all their Slave made Exports no matter who sells them, which quite Frankly is Practicing the America 1st Policy, Money where your mouth is, as so many Americans have Sacrificed far more than a few dollars for Our Freedoms, and will also Stop the Billionaire Globalists from totally Dismantling America, as without the U.S. buying all their stuff their Economy will Crater.
I know many Politicians in AZ give lip service to Freedom and then Vote against the People by not fixing our Election Laws, and even tell us there was No Voter Fraud in AZ, they must think we’re Stupid or know most won’t Remember in 2022, they’ve been right in the past, and I hope they’re wrong, this is now up to All of You.
America’s was founded on Christian Biblical Principles, however by what has taken place in the past years is proving that is no longer true, unless those called by His Name Repent and Turn from their Wicked Ways so God can Heal their Land our futures are doomed, how much Farther will Believers in the USA Fall?
You can find us on: Rumble, MeWe, Codias, FB, Gab, Parler, and our Website: www.VansCrossroads.com, as we reach out to insure against being blocked as is presently the case with YouTube.
God Bless You; Clair Van Steenwyk / AKA Van the Radio Man
Share on FacebookShare on Twitter
AZ LandsAZ PoliticsChinaChinese VirusClose Dept. of EDEnd the FedFreedomImmigration BanImpeach CongressLand RestorationLibertyNo AmnestyNo IncumbentsNo Legal StatusPRO LIFETerm LimitsTrumpUS ConstitutionVanVirusWALL