AZ Voted, just not the way most thought they would as very little Party Loyalty Left these days. 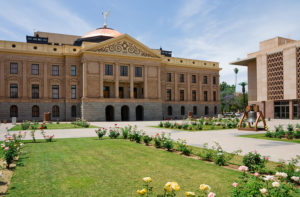 AZ Voter Irregularities But Not Fraud, Just No Party Loyalty

Where’d Penzone’s Extra 108,662 Votes come from? I believe of course some flipped from Trump to Penzone to get him to 729,636, but where’d the other 108,662 Votes come from? These likely came from the Ballot Harvesting that was allowed, and is why we’re losing AZ. We must Vote Real GOP Reps into Office beginning with the Leadership of the AZ GOP in 2019 GOP County & State Meetings.

History Repeats Itself in the 2018 General!

Add the difference between Ducey and Mc Sally to Garcia, I believe Sinema won with Crossovers from Ducey, and Numbers don’t lie, just as they didn’t in 16 with Arpaio, I believe there was extensive ballot harvesting in the 2016 race that wasn’t needed in 2018.

Sinema Ads should have been responded to by GOP National, they just sat by watching Sinema sell her softer side knowing early impressions almost impossible to change. The GOP McCain wing with his old Chief of Staff now Democrat Woods did Ads Endorsing Sinema telling Republicans to Vote 4 her.

Decades of Settling for the Lesser of Two Evils McCain has ended Badly.

2018 State General Election Statewide Votes Cast 2,409,910, Governor within 33,745 & US Senate within 26,169 of total, with some not voting for either, I believe the majority of Flippers were McCainites, Democrats and Independents, that couldn’t  and didn’t Vote for Garcia a Horrible Candidate.

The numbers got even worse as we went down the Ballot, we also lost a House Seat, SOS & Supt. of Public Instruction, so No Coattails 4 GOP, and some GOP Crossovers plus Bad planning from National GOP in the US Senate Race. We had close State Senate Races in LD’s 17 & 28, so watch out in 2020.

According to Judicial Watch :

Maricopa County had 143,542 New Registered Voters and 1,470 provided Alien Registration Numbers, they are Foreigners and not allowed to Register or Vote.

This is a Form of Voter Fraud, however it’s Incompetence as well by those who accepted the Forms and especially by the Maricopa County Recorders Office for putting them into the system, we need someone running this office, that Respects our Laws, but also knows how to set up Elections, and at present we have neither.

Illegal Immigrants are adding Seats to the US House and that’s why the Dems won’t stop it, Illegals live in mostly Democrat run States and therefore gain seats in the US House where they can and do intend to put an End to the Republic of the United States of America, so for that reason alone anyone who supports the continued open borders policy for me is nothing less that a Modern Day Benedict Arnold.

When classified by the share of Illegals & Immigrants out of Total State Population, the Top Five States in 2016 were Ca. 27%, NY 23 %, NJ 23%, Florida 21%, and NV 20%, however believe the numbers are higher as they’ve now said the total number of Illegals is 24 Million not 11 Million so what is the real Number of Illegal & Legal Immigrants within Our Borders and how do you think this will Affect the House Seats when 2020 Census is Taken?

We’re being Invaded by Illegal Immigrants!