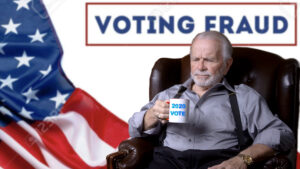 AZ WAKE UP TO AZ’s LEGAL ELECTION FRAUD COVER UP!
Read, Like & Share
I watched the meeting at the Capitol with President Trump’s Attorney R. Giuliani and AZ Legislatures with several Experts, and Volunteer Poll Workers explaining what they witnessed at Polling Places and Counting Rooms in the Nov. General Election. I was also at the polls handing out Jim O’Connor’s cards, and Ca. Democrats wearing Biden Shirts talked to voters for Biden and to make sure democrats were able to vote or drop off BALLOTS.
I believe the witnesses, as the Legislators holding the meeting said they couldn’t do a thing unless the GOP Leadership in AZ’s House & Senate would form committees giving them subpoena power which is actually useless when our laws can’t be used against Companies outside the U.S., the AZ Senate has now called for a Special Session, and I’m hoping the public will be able to attend and speak as well for without our voices this I believe will turn into AZ Politics as usual.
Update 12/05/20 Speaker of the AZ House says there will be no Special Session, Bowers press release says, “Even if such evidence existed, the Arizona Legislature couldn’t do what is being asked. Under our state’s constitution, the Legislature can act only when it is in session, and the Legislature could call itself into a special session only with the support of a bipartisan supermajority of its members. That won’t materialize, but even if did, the Legislature couldn’t provide the recourse the President’s team seeks. I prayed I’d be wrong on them not doing anything, however once again in a Crisis little on No Protection from the Socialist Marxists in Our State & Nation.
Link to comments in their entirety: http://www.republicanbriefs.org/, however my position on this has remained constant for Decades, every State Legislative Body must have a Consitutional Compliance Officer working with both Houses before any and all Legislation is even considered by any Committee, as most who serve have no idea what they’re actually voting on until after its’ Law and that’s whether it’s a State Statute or Constitutional Amendment and this is why AZ and other States have Unconstitutional Laws as those in Office listen far to much to Lobbyists and Special Interests rather the Complying with the Oath they All Take. One other issue is if Our Elected Officials can’t gurantee Legal Elections with Built in Safe Guards they should all resign as you can Fly a 747 thru our Election Laws.
There was and is Legal Election & Voter Fraud in AZ, our Maricopa County Supervisors are supposed to be our 1st line of Defense against voter fraud as they recently appointed a new person to be in charge of the Polls, however Ballot Harvesters are Legally Allowed to drop off Ballots due to Badly written AZ Election Laws, the Supervisors also rushing to Certify the Results stating there was no Fraud without an Investigation.
The Supervisors passed the buck forward to the Gov., SOS and AG, this entire system has failed the Voters and especially the Politicians who for years have never fixed the Ballot Harvesting or Early Voting Laws, including AZ’s GOP State or County Leadership.
There’s Legal Voting Fraud in the system, and most voters have no idea this goes on, it begins with Voter Registration, as the SOS has the Federal Form on AZ website which requires No Proof of Citizenship or Residence to Vote 4 Federal Officials, and the SOS moves anyone using the State From whose info is insufficient is automatically put onto the Federal List, other areas are the signature process to get candidates on the ballots, AZ has badly written Election Laws and Voters must Demand those in Office Write New Laws.
AZ Voters have been Cheated once again and hope more Republicans will Wake Up and Demand the Republican Party Leadership do a Forensic Audit, we all know just counting the same Ballots over again will solve nothing.
AZ must have these Machines Removed before the 2022 Primary Cycle or we’ll never have an Honest Election again, we’ve had Systemic Election Fraud for well over 2 Decades.
We must all join together in Demanding and End to Ballot Harvesting as is the law in other states, End or Dramatically Shorter Early Voting, and use only Paper Ballots as these Computerized Machines and Companies can’t be trusted.

Contact the Gov., County Supervisors, AZ House & Senate members and AZ GOP Leadership at all levels, and Demand this Investigation not be more Political Theater, a Real Audit will lead us to the Truth, and revoke the Certification, and if it turns out to be just more Political Theater then let them know that 2022 isn’t so far away and that you won’t forget what they do or don’t do to Protect Our Right to Vote by Not Voting for them.