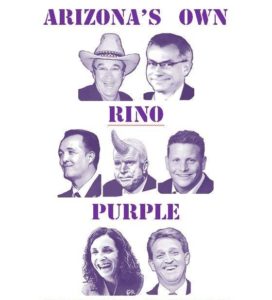 Purple GOP says Vote 4 US or the Democrats will Eat You!

Clair Van Steenwyk’s Response to Rob Haney’s & Rick Hennessey’s comments on the GOP in GOP Briefs of 9/18/18http://republicanbriefs.org/ and who’s left to Vote 4 in the Nov. General: I agree more with Rob than Rick, as we face this dilemma every 2 yrs. with the Purple Wing of the GOP winning and then demanding all the GOP Voters settle for them in the General who we didn’t support in the Primary for the Good of the Country or State, when in fact it’s for only the Good of the Purple Wing of the GOP and nothing more.

Jean & I have been active in the GOP since moving to AZ, with my Radio Show putting on GOP Candidates, Forums, Rallies, Campaigning 4 Candidates and finally in Running 4 Office myself.

We supported Candidates like Jeff Smith vs. Flake, Andy vs. Ducey, Horne vs. Brnovich, Moak vs. Quail, Dowling vs. Lesko, Branch vs. Field, Douglas vs. Huppenthal, Myself vs. Flake & Cardon, Trump vs. Purple Gangand lastly myself vs. Livingston. and although losing then asked to Vote 4 the winner of the Primary by the Purple Wing of the GOP 4 the good of the State & Country, meaning the GOP Theology of Lesser of Two Evils .

The problem of Lesser of Two Evils is if those Voting for True Conservatives / Defenders of the U.S. Constitution would Donate the $$$$$$$$’s needed to compete as those they run against get Thousands and in some cases Millions from the Lobbyists and PACS to maintain control, the bad decisions for the Nov. Gen. wouldn’t exist if those who are so angry would just DONATE to Candidates that will Truly Represent US and at the same Time Save Our State & Country’s March to Socialism for All of US, or complain after the Primary and then vote knowing they Lied to US in the Primary, for the Good of the PURPLE Wing of the GOP.

Jean & I vote on Issues and Records if the Candidate has one and if not then on their personal history on the issues gotten from them and supported by those who’ve known them well,we don’t vote 4 Liars or Cheats so it’s easy for us after the Primary, so we’ll be voting 4 Gaynor, Bottom of the Ballot Candidates and Props etc. as can’t vote 4 Evil.
God Bless You All; Clair VAN Steenwyk

Is the USA Politically Insane?