It’s time for All Americans to Support those in Hong Kong who are Fighting 4 Freedom by Boycotting the Products the Chinese Communist Government uses to Build Up Its’ Military a Threat to the Free World and which also enslaves the Chinese People with work camps, retraining centers which try to Brain Wash those who disagree with the Communist Philosophies which are all EVIL 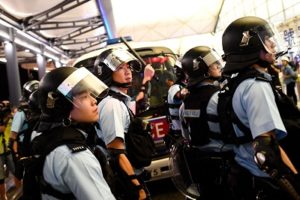 We must Stand with HONG KONG and against the Real Evil of Communism as so many have forgotten what the cost has been of this EVIL form of Government in Russia & China which has cost both nation well over 30 Million of the people there once the Communists took total control and we must show the World that the U.S. still Stands for Freedom and has no problem giving up Cheap Stuff to fill its’ Closets, Toy Chests and Desire for Electronics at Cheaper prices, which is the major cause of the Chinese Governments ability to Enslave the People of Hong Kong & China not to mention their plans to do the same to the rest of us in the next few decades.