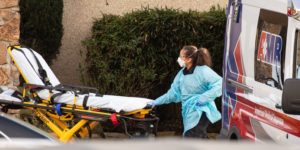 China has Declared WW III with a Bacterial War and cost American Lives and caused the U.S. Government adding  2.2 Trillion to our National Debt, and when this is all over we’ll have more Dead another Trillion or more in lost incomes to all of us, so what should we do?
I suggest since China holds over 1.1 Trillion of our National Debt the U.S. declare those Bonds paid in full, and let them take the U.S. to court, hopefully then all the Facts will come out and the U.S. will win its’ case, and when the U.S. Congress changes the Laws so we can all sue China.
We must also rebuild our Drug Companies by having them either return to the U.S. or set up new ones with the Funding necessary to Build the Industry, we  depend on China for the Medications we all use from time to time, China can’t and shouldn’t be Trusted, as they’ve already proven.
We must contact those who represent us in DC, State, County and City Governments, and Demand they put forth the necessary Legislation changing laws so We the People can sue China, and deal with the Trillions they’ve cost us as well, and the World at large will hopefully follow our lead, and when we’re successful we’ll then probably see a Sea Change in the Chinese People and maybe they’ll change their Government, and also deal with the World Health Organization as they’ve betrayed the World, as they’ve been lying and misleading the World about what China really did.
The cheap toys, clothes, shoes etc. have finally come home to Roost, and if we don’t fight back now then we’ll slip from the World’s Stage as the Leader of the Free World for the sake of Cheap Stuff, the time has come for us to join Generations of Americans who paid a price for Our Freedom, and I hope we’re up to the Challenge, and if not what we’re going through now will be the Future for All of US and Our Children’s children.
God Bless You All; Clair Van Steenwyk
Share on FacebookShare on Twitter
Bacterial WarfareChinese VirusClose Dept. of EDEnd the FedFreedomImmigration BanLibertyNo AmnestyNo IncumbentsPRO LIFETerm LimitsTrumpUS ConstitutionVanVote