President Trump Won’t Resign & No Removal, so Illegal Impeachment.
View, Like & Share It
Our U. S. Constitution
I’m Grateful our Founders understood how Power Hungry some in office and special interest groups might use Impeachment as a Tool to Remove someone they Feared, and we now live in that time, and what President George Washington said about Political Parties has come to pass, he stated that Political Parties are the Enemy of Government meaning the People.
Washington realized then as some do now Political Parties would promote what benefitted them not the country as they coveted Power Positions, making it possible to Transform America into something they thought was best, replacing the U.S. Constitution & Bill of Rights for the USA. 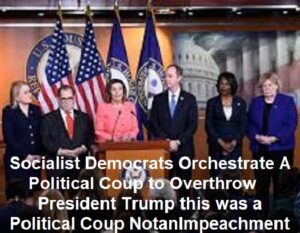 Removal of President Trump / 25th Amendment Section IV. Article II Section VI.
The Congress can’t remove a President without the VP & Cabinet Members or VP joining the House Members, Pence won’t commit Political Suicide Ending his Political Career.
Impeachment of President Trump comes from the House w/ 10 GOP Reps. Betraying US, Joining The Socialist Democrats. List of GOP Representatives Voting to Impeach Pres. Trump: Former VP Dick Cheney’s daughter Wyoming Rep. Liz Cheney, the third-ranking House Republican statement: “There has never been a greater betrayal by a President of the United States of his office and his oath to the Constitution.” This heir to the Cheney throne must be Removed from the GOP.
Nine other House Republicans voting for impeachment: Reps. John Katko /New York; Adam Kinzinger / Illinois; Anthony Gonzalez / Ohio, Fred Upton and Peter Meijer / Michigan; Jaime Herrera Beutler and Dan Newhouse / Washington state; Tom Rice / So. Carolina, and David Valadao / Ca. , most from Safe Liberal Socialist Democratic States no Surprise, however McCarthy better Cheney out of leadership and hope someone in Wyoming steps up and runs against the RepublicRat in 2022 Primary, if not maybe someone from AZ should move and do it for them.
The Constitution contains a number of provisions that are relevant to the impeachment of federal officials.
Article I, Section 2, Clause 5 grants the sole power of impeachment to the House of Representatives; Article I, Section 3, Clause 6 assigns the Senate sole responsibility to try impeachments; Article I, Section 3, Clause 7 provides that the sanctions for an impeached and convicted individual are limited to removal from office and potentially a bar from holding future office, but an impeachment proceeding does not preclude criminal liability;
Article II, Section 2, Clause 1 provides that the President enjoys the pardon power, but it does not extend to cases of impeachment; and Article II, Section 4 defines which officials are subject to impeachment and what kinds of misconduct constitute impeachable behavior.
Article III does not mention impeachment expressly, but Section 1, which establishes that federal judges shall hold their seats during good behavior, is widely understood to provide the unique nature of judicial tenure. And Article III, Section 2, Clause 3 provides that trials, except in Cases of Impeachment, shall be by jury.
The House took the only way left impeachment as that was a slam dunk in the House, however as the U.S. Senate must get a 2/3 majority in the Senate it should be mute issue, but they may move forward even though once the President leaves office he’s a Citizen with no office to Impeach him from, but some believe they just may have a trial in the Senate and let the Supreme Court decide if Trump can ever run for office again, which is the reason for the Impeachment.
The Socialist Democrats control both houses will End Run around the U.S. Constitution, any Republican voting with them and up for Re Election in 2022 is committing Political Suicide, we know there are RepublicRats in both Houses they’ve demonstrated, many of us don’t Trust many of them, and hopefully will remember in 2020 Primary, not to Re Elect these RepublicRats, as they’ll March Freedom Loving Americans into Slavery.
The last few months removed doubt from the minds & hearts of Americans seeking their God Granted Rights & Freedoms, and they’re being threatened by Elected & Appointed Officials at all levels of Fed., State, County and City Governments, and aided by the Big Tech, Media, Print, Globalists, and China.
These are Frightening & Depressing times, however God’s on our side, and some already experienced persecution by family, friends, employers etc., remember Christ said; Fear Not for I AM with You, continue Praying for the Guidance and Do God’s Will, for me that’s to Stand Up and Fight for Our God Granted Rights, I’ve believe God Truly gave Birth to Our Nation and it’s up to US in Our to Maintain It.
Call, email or both demanding Your Elected Officials Not legitimize Impeachment or Censor of President Trump by Contacting US Senators @ https://www.senate.gov/…/contact…/senators_cfm.cfm,,,.
Video on Rumble: https://rumble.com/vcz4bl-dc-government-out-of-control.html…/
Link to GAB:   https://gab.com/vanshouse
God Bless You All; Clair Van Steenwyk
Share on FacebookShare on Twitter
AZ PoliticsClose Dept. of EDFreedomImmigration BanImpeach CongressLibertyNo AmnestyNo IncumbentsNo Legal StatusPRO LIFETerm LimitsTrumpUS ConstitutionVanWALL