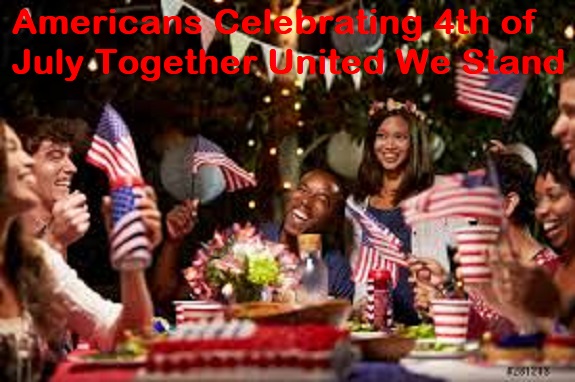 American citizens must All Celebrate the 245 yrs. of Freedom United on the Goal of passing Freedom onto Future Generations of American Citizens, and this passes the Hope of Freedom onto Generations of citizens of other Nations around the World of having more Freedoms tomorrow than they do today as have past Generations of Americans paid with their Lives, Funds and Dedication to over the last 245 yrs. of the United States of America.
I hope we’ll all reflect on not only what our Founders gave to All Americans but also the Gift they gave to the World, here are just a couple of Examples; America saved Europe in WWI and the World in WWII, as most experts agree without the United States both Germany and Japan would have been victorious in Enslaving the World for Generations.
We as Americans have paid and if we hope to remain Free will continue to pay a price for Freedom, and by this I don’t mean just the Freedom to live but also to exercise the God Granted Rights given us in the U.S. Constitution which so many One World Gov. types including many Elected Officials within Our Own Borders, or another way of saying it is Domestic Enemies, and it’s up to all of us to not only Expose them but to also Remove them from office starting with the 2022 Primaries and continuing into the General Elections.
We must all realize what the World would be like if the U.S. didn’t exist, for one just look at all the Inventions coming out of America that have improved lives around the World, and also all the Monies donated to people around the World, as well as the Monies sent back to Families around the World by relatives in America, yes we’ve done a Great Deal of Good since our founding and hopefully we’ll continue to do so, however I fear if the Marxist Socialist Democrats continue their March to Removing Our Freedoms the Entire World will move into a Dark Age of Slavery like we’ve never seen before.
We must look at the Opportunity all of us have been Blessed with and realize with that comes the Responsibility to Remain Vigilant in our Protection of it, and never shrink back from doing whatever we’re called upon as a Nation or Individual to Insure the Continuation of Fighting to Remain the Freest Nation ever know to Man.
Our Battle cry must be America 1st now and always, I warned Voters in my 2012 Campaign for the U.S. Senate against Flake, however most didn’t think it was that bad, and most have now seen it 1st hand, so I’m hoping Voters Heed this Warning before your Children, Grandchildren and future generations are being Marched into Slavery, and join others running in AZ and across America to Remove the Incumbent Career Politicians everywhere.
We hope moving forward is that as Americans we can all move forward as Americans, and not allow Marxists who are a Movement of Divide and Conquer given the opportunity to do so, History must be remembered, to make certain the mistakes of the past aren’t repeated like HItlers Super Race, we must remember all the Good that’s been accomplished in the past to Form a more Perfect Union must be repeated to move forward to a Better Future for All Americans Uniting behind that cause for the Sake of Americans yet to be Born.
America was founded on Christian Biblical Principles, however by what has taken place in the past years and presently in DC and the Nation is proving that is no longer true, unless those called by His Name Repent and Turn from their Wicked Ways so God can Heal their Land our futures are doomed, how much Farther will Believers in the USA Fall?
You can find us on Rumble, MeWe, Codias, FB, Gab, Parler, and of course our website: VansCrossroads.com as we reach out to new sourcesand insure against being blocked by the Socialist Media Giants. One last thing, I’m running for AZ Senate in LD 22 and need signatures to get on the Ballot, so please click on this link to AZ SOS site to sign my petition On Line & Thanks for the Help: https://apps.azsos.gov/apps/election/eps/op/
You may contact me directly by email or phone; cjjmvs@gmail.com or 623-322-9979.
God Bless You All; Clair Van Steenwyk