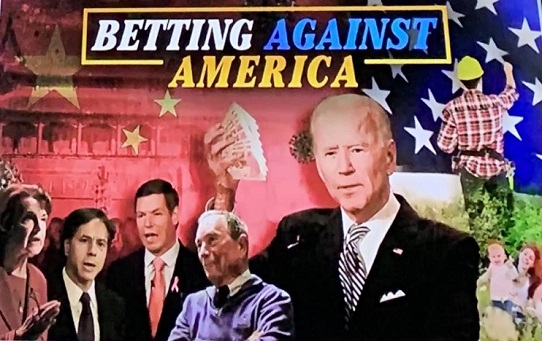 Domestic Enemies Across America
View, Read, Like & SHARE IT
Link to Video: https://rumble.com/vk3yf1-insurrectionists-destroying-america.html
We have Domestic Enemies at work to destroy the USA from the Top of Gov., Business, Political Parties, Special Interest Groups, Universities, Think Tanks, Most Media etc..
Our Nation is under attack by those in office from the Federal Gov. to the Local Government & School Boards, and most Free thinking Americans can see it and pray that those so many depend on for the Truth would begin to speak the Truth about the Anarchists attempting through Legislation, Media, Press, Internet etc. Propaganda what they’re up to, rather than being so vague in their presentation by making such idiotic statements such as they must don’t know what they’re doing or they’re just not planig properly, or addressing real issues, all of these statements by many in the so called conservative press protect them from getting attacked, however they aren’t telling the Truth to those who depend on them for it.
The Formula being used has been used over and over again in Russia, China, Vietnam, Cuba, Korea and other Nations to Divide the people against one another and then get them to turn on the very Freedoms they all enjoy in place of a False sense of Security, when in fact the End result is the loss of Freedom of All and the Rule by the Elite Few who believe they’re better fit to Rule All of US, WAKE UP AMERICA while you still can.
Those in Government, Press, Special Interest Groups, Colleges, Universities etc. who promote any form of Socialism are Marxists and must be exposed and called out directly for what they are, and those in office must cease calling them their Democratic Colleagues, that is unless of course they’re really Blind enough to believe what they say and then they must be removed from office either in an ELECTION or a RECALL them or we’re all doomed to the same fate as was done in Russia, China, Cuba, Vietnam etc., so my advice is anyone whose supported any form of legislation whether it passed out not isn’t fit to run for office let alone for you to vote for them, and I hope all Americans realize we’re in a Political Civil War in America and around the World and the Future in in Our Hands.
I pray all who view and read this will begin to understand just how devious this is and yes there are some in the GOP who quite frankly go along with this, they’re also power and position hungry and these must also be weeded out in the Primary cycle of 2022.
America was founded on Christian Biblical Principles, however by what has taken place in the past years and presently in DC and the Nation is proving that is no longer true, unless those called by His Name Repent and Turn from their Wicked Ways so God can Heal their Land our futures are doomed, how much Farther will Believers in the USA Fall?
You can find us on Rumble, MeWe, Codias, FB, Gab, Parler, https://freetalk.app/,and of course our website: VansCrossroads.com as we reach out to new sources and insure against being blocked by the Socialist Media Giants.
One last thing, I’m running for AZ Senate in LD 22 and need signatures to get on the Ballot, so please click on this link to AZ SOS site to sign my petition On Line & Thanks for the Help: https://apps.azsos.gov/apps/election/eps/op/
If you want News the others don’t report watch; OANN.Com and Newsmax, if your cable doesn’t carry it then change or go to streaming if you want real news, stay informed. You may also contact me directly by email or phone; cjjmvs@gmail.com or 623-322-9979.
God Bless You All; Clair Van Steenwyk
Share on FacebookShare on Twitter
AZ PoliticsClairClose Dept. of EDEnd the FedImmigration BanImpeach CongressIndependent VotersLand RestorationLibertyNo AmnestyNo Common CoreNo IncumbentsNo Legal StatusPRO LIFETerm LimitsTrumpUS ConstitutionVanVoteWALL