Will You Stand With President Trump and Help Return Sound Government and Moral Values to This Great Country? 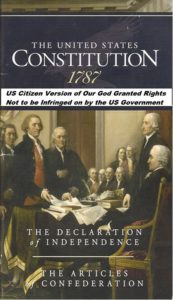 WE THE PEOPLE must decide whether we will support President Trump by helping him to return sound government and moral values to our Nation as outlined by our Forefathers, or allow the continued decay of our country; whether we will hold our elected officials responsible to US, or allow the continued disrespect for constitutional values and principles.  I am challenging each citizen across our Land to confront each candidate, whether incumbent or not, whether Republican and announced conservative or not, whether for local office, county office, state-wide or national office, confront and stand strong asking the following questions politely but demanding an answer along the lines of what I also have written as guidelines for answers:

What is the proper role of government?

Our Founders pledged their lives and their fortunes to establish and uphold the Constitution of the United States.  They did not pledge to merely acknowledge and talk around the Constitution, and to play “safe” so they could be reelected, with reelection a primary factor in their decision-making.  We have too many in public office; whether at the city council level or higher, who value reelection and preferred parking spaces to defending the Constitution and representing the will of the people. Too many public officials who care more about pleasing money and special interest groups for reelection than speaking for the nameless citizens who voted them into office initially.

What are your views about public debt?  What is your opinion of using debt and how it should be extinguished?

Our Forefathers warned about debt; it should be paid by the generation that created it!  Any public official who endorses expenditures adding to debt should be viewed most cautiously and confronted.

What is your view on unalienable rights stated by Jefferson in the Declaration?

Our Forefathers understood, publicly proclaimed, and even had their collective beliefs written into our founding documents that our rights are given by our Creator, NOT by government.  Our inalienable rights cannot be taken by man without coming under the judgement of God.  Your candidate’s answer to this critical question will shed light on his/her philosophy of governing, as well as their principles and values.

Our Constitution was made only for a moral and religious people.  It is wholly inadequate to the government of any other.

Our Forefathers understood that solutions should be based on morality and virtue.  Our public officials of the past understood that overruling our founding documents also meant overruling the Word of God since the foundation of America was based on Judeo-Christian principles.  To create new laws to nullify the laws of God and create or encourage a new morality to nullify the standards our Forefathers viewed as immutable was to invite an overall breakdown of what our very foundation and development as a Nation was.  Social Marxism promotes the shunning of God for the endorsement and allegiance to the all-powerful State.

WE THE PEOPLE must begin to confront those seeking public office, and are now holding the same.  We must confront their beliefs to the aforesaid questions, and continue standing until the questions are answered.  Failure to ask those seeking elective office is only promoting the option that this Nation so conceived will perish from the face of the earth.  Mr. Trump understands this, and decided to leave his well-earned luxury life for what he is experiencing now.  What are you prepared to give up to maintain your freedoms?

LYLE J. RAPACKI, Ph.D. is an Intelligence and Threat Assessment Specialist who has provided intelligence briefings and consultations to selected members of the Arizona State Legislature on Border Security, Deviant Movement Groups, and threats to State sovereignty from May 2010 thru April of 2018.  Dr. Rapacki’s reports, briefings and consultations have enlarged to include elected and law enforcement officials across the country.
We hope all who follow our pages will appreciate Dr. Rapacki’s due diligence and reach out to him for further input, Don’t forget to follow True Conservative Pundit on Facebook and Twitter.