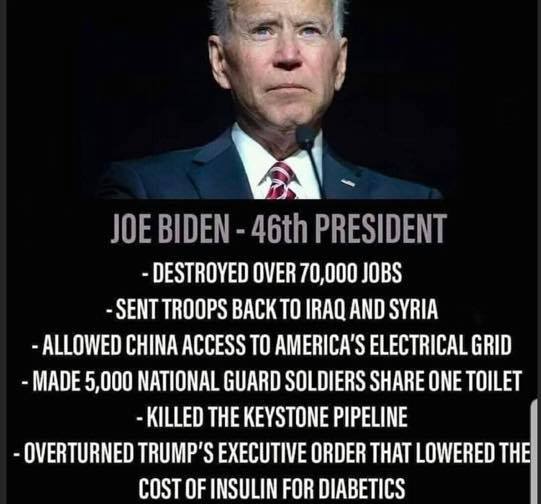 Biden said he’d cross the aisle, well he did, he double crossed the Voters who were foolish enough to believe a Lifetime Politician & Socialist would ever compromise the Socialist Agenda as he & his Socialist Comrades busy Shredding the U.S. Constitution.
The Executive Order isn’t a Law and can’t be enforced by the Executive Branch, so make sure you contact those in DC and States letting them know to fight back Now.
His orders to shut down the pipeline costing Americans their jobs by the thousands, shutting down the oil industry by stopping drilling on Federal Lands more jobs, not to mention the Federal Gov. isn’t allowed to own land within any state except for Military use.
Biden’s stopped the Wall from being built, costing jobs and the U.S.A. security from Illegals, Drugs and the China Virus, and in addition the China Drug Cartel smuggling drugs into the US with its own distribution already set up.
Biden and his Socialist Cohorts intend to bring Our Republic down within the 1st two years of his being in office, and should anything happen to him then the major part of the work will be done and all the Incompetent Harris will have to do is sit in a chair and do what she’s told and know she can do that, as she’s had plenty of experience.
How did America get itself put into this position?
Simple, we’ve Abandoned a Moral, Religious Code that Built our Nation in favor of Feel Good Policies at all levels of our lives, this began with the destruction of the Family Unit with Johnson’s Great Society, and Religion becoming more of a Social Experience than a Spiritual One, by turning God into Santa Claus, which God isn’t and Never could or will be.
The so-called Progressive movement was born from Socialism, which is Anti God, and starting with Wilson and Dewey promoting it. In this past Election Cycle many called themselves Socialists Indoctrinated in the Public School System, since its take over by the Carter Administration and Weak Kneed State Officials holding their hands out for Money, and not caring or understanding the Long Term Destruction of Freedom for Our Families.
Can we fix this? Yes we can, if we’ll repent, turn from our Wicked Ways and do God’s will, then GOD will Heal Our Land / Souls, this is our Path back to Freedom and each of us must make this Decision for God to Restore His Granted Rights to US and giving US the Courage to Stand Up and Protect them.
This may sound simple to some and repulsive to others, however this is the True Path back that will lead All of US to a Free and Hopeful Futures, the Decision is Yours.
We’re also on Rumble: https://rumble.com/vdhk3z-bidens-25-executive-orders…
God Bless You All; Clair Van Steenwyk
Share on FacebookShare on Twitter
AZ PoliticsBidenClose Dept. of EDEnd the FedFreedomImmigration BanImpeachImpeach CongressLand RestorationLibertyNo AmnestyNo IncumbentsNo Legal StatusNo TPP or TPAPRO LIFETerm LimitsTrumpUS ConstitutionVanVoteWALL